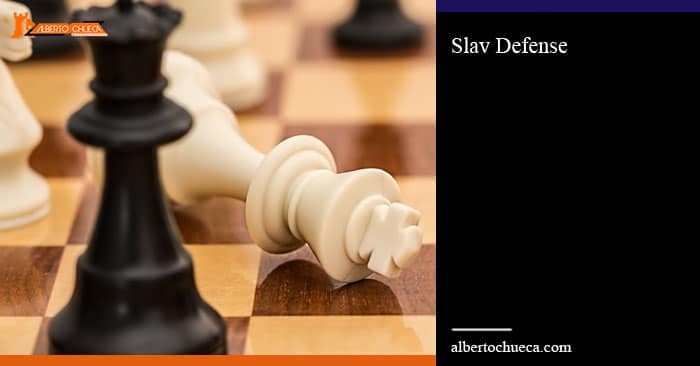 Are you having trouble playing against Queen’s Gambit? In this post, we will study a strong and popular variation against it: Slav Defense. This is a fantastic line, they play it in the Elite, but at the same time, it is a good option for beginners and club players.

We have Slav on the board after the moves:

Some theory and ideas in Slav Defense

When White plays 2.c4 Black has two main options: to accept the Gambit with dxc4 (Queen’s Gambit Accepted) or decline the Gambit by protecting the pawn on d5. Then, there are two main ways to protect this pawn: e6 (which is the line we call Queen’s Gambit Declined) and c6 (Slav Defense). The first option (e6) could seem better at first sight because it is also clearing the line to develop the dark squares Bishop.

However, this move has an important drawback: the light squares Bishop is being blocked by the pawn on e6. And that is the good side of playing Slav Defense: we are protecting our central pawn with a pawn (which means that after an eventual exchange, we can recapture and keep controlling the center with a pawn) and at the same time our Bishop on c8 is not affected, so it can be developed to f5, as it happens in most variations.

“Learn how to play Slav Defense”

At this point White has some alternatives, like 3.Nc3 (which usually transposes to the mainline) or the solid and slow 3.cxd5 (Exchange Variation), which is not particularly dangerous, it is well known for having a big tendency to end in a draw.

This is mainline in this position, and it is the one we are studying in this post. However, there are other interesting options we need to mention, like:

With pressure on c3, threatening Qh4+, and also taking on d4 after a move like Bd2. There is good compensation; Black is sacrificing a piece for some pawns. In some variations, the second player can even get 4 pawns, and the white King cannot castle, so we could say the position is promising for Black, although unclear with chances for both sides.

The position is balanced, maybe very slightly better for White.

This is the typical pawn structure we are getting in middlegames of the line b) 6.e3. We can see White has a very small space advantage, as they have a central pawn in their fourth rank, and Black’s central pawns are only in their third rank. There are half-open files on “c” for White and “d” for Black.

In line a) Ne5 we should not talk about a typical pawn structure, since it is very variable and the material is a little unbalanced, but we will analyze the typical plans in the next section.

In the mainline, we suggested Black could even get 4 pawns for the sacrificed Bishop. In general is fine to play the endgame when we have 4 or even 3 pawns as compensation for a piece disadvantage. But also the middlegame could be interesting for the second player, since the white King is not going to be able to castle, and there will not be a clearly safe square for him.

Black will try to fight against White’s Center, by breaking with moves like c5 or e5, as it is typical in this kind of structure. On the other side, White will try to exploit the slight space advantage, sometimes advancing carefully central pawns and maybe starting some kind of attack on the Kingside when possible. Both sides need to play carefully and avoid making a wrong step.

King: There is some very specific exception, but Black almost always castles Kingside in Slav Mainline.

Queen: In the line with b) 6.e3, the Queen goes very often to a5 or c7, supporting the breaks on e5 or c5 and also clearing d8 for some Rook.

Rooks: The “d” file is always at least half-open for the second player, so one black Rook should go there. The other goes frequently to “c”, to support the break on c5.

Bishops: Light squares Bishop goes out of the chain of pawns, to f5 or also sometimes to g4. In the line of a) Ne5 we studied in this post, this Bishop is sacrificed on e4 guaranteeing a very nice play for its army.

“Learn how to play Slav Defense”

About the dark squares Bishop, it goes almost for sure to b4. Sometimes it is exchanged for the Knight on c3, which controls and supports the center. In some other lines, it comes back to e7 (in the middlegame) to help in the defense of the Kingside.