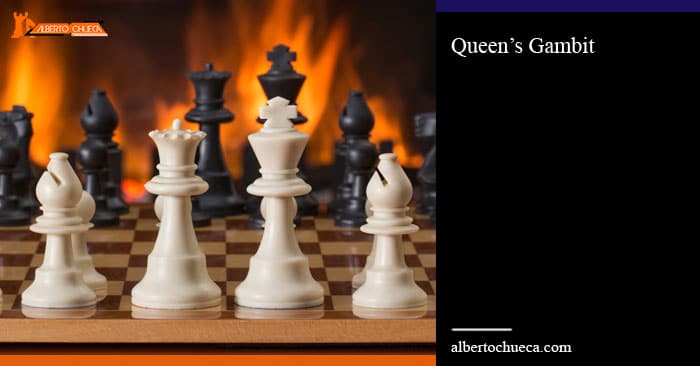 Have you ever heard or read about Queen’s Gambit? You think it is an interesting opening but you do not understand it very well and you are not sure how or where to start? Well, if that is your situation, then you are on the right site because in this post we are going to learn and understand from the very beginning how to play this strong variation.

The idea with the second move c4 is to attack Black’s central pawn, and trade it for a Bishop pawn, which should be very convenient for White. The problem is that this “c” pawn is not really protected right now, that is why they call this a Gambit (in the line I recommend below White should get the pawn back quickly).

After 2.c4 Black has some options: they can accept the Gambit with 2. … dxc4 (Queen’s Gambit Accepted) or they can decline the Gambit protecting the pawn with another pawn, like with 2. … e6 (Queen’s Gambit Declined). Those are the lines included in the theory for Queen’s Gambit, so those are the ones we are going to study in the post. Although we need to say that Black could also play other options like 2. … c6 (Slav Defense) or 2. … e5 (Albin Countergambit).

Some theory and ideas

There are other interesting and strong possibilities for White here. 3.Nf3 is mainline, it is also very strong, and 3.e4 is another interesting move. But 3.e3!? is probably the simplest way to play in Queen’s Gambit.

Staying with the sacrificed pawn down can be tormenting for many young players, and even for more skilled ones, it can be difficult to keep a healthy position if they did not study thoroughly the theory before. But in this line with 3.e3, that problem will not exist. White should get the pawn back soon and will play a nice middlegame.

At some point there can be a trade on d4 and White could have an Isolated Queen Pawn, which is not as bad as other isolated pawns, because it offers some very nice compensation (in the Pawn Structures and Typical Plans sections below, we analyze this kind of positions).

There is also a very nice trap in this line of Queen’s Gambit if the second player tries to protect the pawn on c4:

1.d4 d5 2.c4 dxc4 3. e3!? b5? A logical move, protecting the extra pawn with another pawn, so the second player can continue the development, but, it is not going to be so easy

Another option for Black is 3. … Be6, we could say this is a sad attempt to save the extra pawn. White can just continue with 4. Nf3 and 5.Nc3 and threats like Ng5 or Ne5 attacking the bishop or the pawn on c4 guarantee the recapture of the “c” pawn, unless Black defends the pawn at all cost, accepting a much worse position.

In this position Black can play some different moves, probably Nf6 is the main and most popular line. We call this Orthodox, it is the one we are going to focus on, but there are other options like 3. … c5 Tarrasch and 3. … c6 Semi-Slav.

This is very common in Queen’s Gambit Declined, Orthodox Variation. It is a very famous pawn structure because it can also surge from other popular openings.

The other plan is to take the center, with the moves f3 and e4. White can get a great initiative if Black does not find the right moves.

This is also a very common and important structure. It can appear in almost any opening. In Queen’s Gambit, it can surge in the line where Black accepts the gambit (2. … dxc4).

White needs to exploit the space and center advantage they have. There is a nice square on e5 for the knight and “c” and “e” are good files for the rooks. Black will try to attack very strongly the isolated pawn on d4.

Frequently there will be a Carlsbad structure in these lines and White has two main plans; both of them are fine almost always:

Almost for sure, there will be an Isolated Queen Pawn structure (with a white isolated pawn on d4). White could try to use the space advantage and start an attack on the kingside. The first player should avoid trades because his best possibilities are in the middlegame. The isolated pawn could turn into a big problem for White as some pieces are traded.

White could also prepare and try to advance the Queen Pawn with d5! at some moment and get rid of the weakness. The plan for Black is to exchange pieces and play the endgame, and control, block and attack the isolated pawn.