Chess memes are kind of like chess jokes. In that, they have this innate ability to make us laugh because the chess terminology kicked in there really resonates with us.

Memes are funny in general because they are very relatable. Especially in this golden age of the internet, social media, etc, there are millions of memes available on the internet. While chess may not be a hot spot for internet humor and chatter, we have some jokes up our sleeves as well! :) We will be doing our best filtering out some good memes to share, and analyze how this impacts us chess players!

Do you ever feel like you are stuck in a rut when you are calculating the position on the board? Whether it be a puzzle or your own game. If you need something relatable, look no further than this meme: 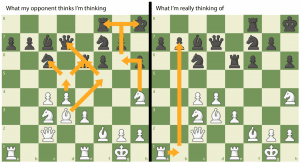 That’s a good one. We see on the left chessboard, how White has a lot of tactics available, so, therefore, a lot of lines are being calculated, while on the right, White is stuck, and only sees one variation. Very relatable!

That sweet taste of victory

We have all been there and done that. You make a beautiful creation on the chessboard, and you put yourself into a winning position. It is only a matter of when you will win it, not if. If you can’t relate to the meme below, even if it’s imaginary, then I don’t know what to tell you. 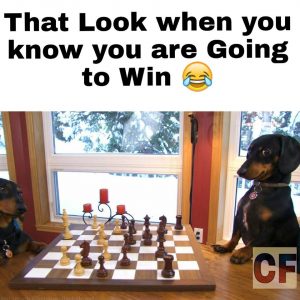 This probably happens to beginners a lot. Your opponent plays a weird-looking move, which looks illegal. You either never knew the rule, or forgot about the rule. You look at your opponent, then you realize that En Passant does indeed exist. The following meme hopefully does not relate to you! 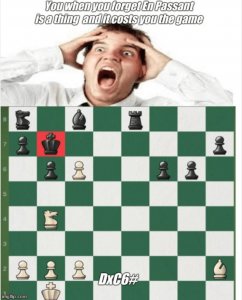 How frustrating it must have been for Black to innocently push their pawn from c7 to c5, and forget the beautiful checkmate with En Passant. The Knight and Bishop on h2 cover some key squares to where the King cannot escape.

Chess Meme about the Kings in chess

Have you ever realized that it seems like while all of the other chess pieces are fighting their tails off, the Kings stay put where they are assigned? They generally don’t contribute to the attack until the endgame. So what might the two Kings be thinking about while all the commotion is going on at the chessboard? 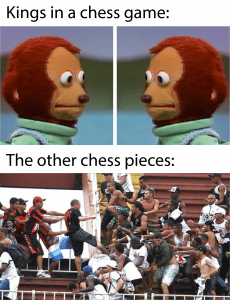 The monkeys on the top represent the Kings. They are confused, because of all of the ruckus going on at the bottom with the other chess pieces.

Again, what makes these chess memes so special is that they relate to emotions chess players feel during the games. It’s unique to almost any other endeavor.

Have you ever realized you missed a winning move after you finished the game? Whether it be online, when the computer scores a missed win, or in an OTB game, when your opponent, or perhaps another spectator points out what you could have done better. It’s very easy to be dejected when you discover that, especially if you drew or lost the game! 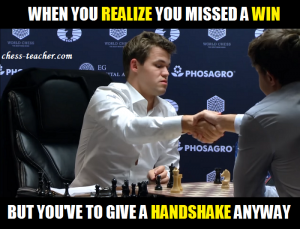 This picture was from a World Championship game in 2016, between Magnus Carlsen, and Sergey Karjakin. Depending on how emotional you are, the handshake can relate to some. If we’re so frustrated, it may not be something we want to do. But, we are required to acknowledge our opponents before and after the games! :)

There’s also the classic instance of touch move. In chess tournaments, you are required, if able, to move the piece which you touched, even if you change your mind. This meme should be very relateable if you’ve ever been in this situation, on either side! 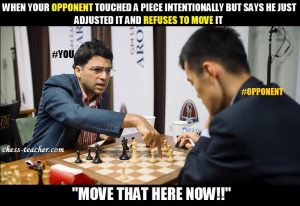 As is the case with memes, this was not a real touch move controversy. What probably happened was that Viswanathan Anand and Ding Liren were analyzing the game together, and maybe a serious Anand looked rather angry in a shot. Either way, it’s funny to look at and possibly relate to.

The last meme we will show is a little bit silly. Of course, you cannot play a game of chess without your King. However, the goal of the game is to checkmate the King. So what happens if you try to take your King off the board so that you can play the game without getting your King mated? 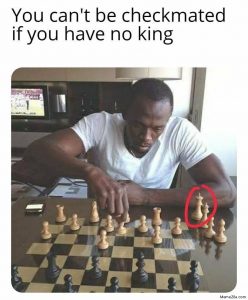 Of course, it’s a bit silly, because if you attempted this in any game, your opponent would command you to put the piece back where it belongs. But, as mentioned in the past, we do need a little bit of humor in the game!

Go share these memes with the chess world! Maybe they will make people laugh :)

If you want to find some more chess memes to enjoy, feel free to do a google search. There are some more good ones out there!