The Top 10 Defensive Chess Openings for Black and White 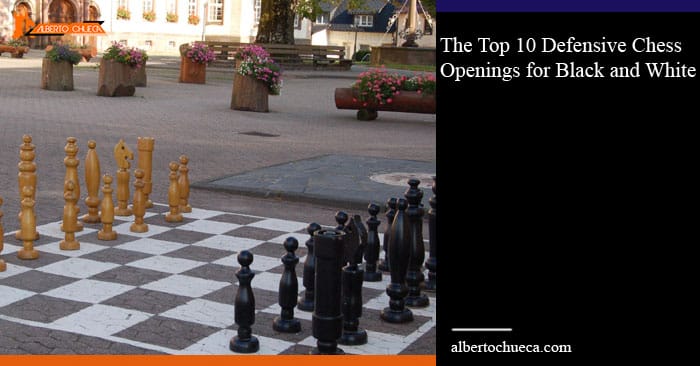 The Top 10 Defensive Chess Openings for Black and White

Do you like to play quiet and solid positions? Do you prefer to avoid risky and open middlegames? In this article, we analyze The Top 10 Defensive Chess Openings for Black and White.

This is a very solid and interesting system. The first player will improve the position step by step. There are some different ways to play English, but in general, the positions will be slow and with interesting maneuvers.

Also, something good here is that there is not as much theory as in other good openings, like King’s Pawn. Fantastic players like Anatoly Karpov, Mikhail Botvinnik, Garry Kasparov, and Magnus Carlsen used English.

This interesting and strong system has been increasing its popularity in last years. Pieces are developed not too aggressively but in good and active squares. Frequently, White gets nice positions, without any significant advantage but with a very easy to play middlegame and with the possibility to improve with some slow but strong plans.

The Top 10 Defensive Chess Openings for Black and White: Alapin, and Petrov.

This is one of my favorite ways to play against Sicilian Defense. The first player won’t have to study the long theory or prepare to face any of the strong and aggressive defenses Black can play in an Open Sicilian with Nf3 and d4, like Najdorf or Pelikan.

The main idea in Alapin (when White plays 2. c3) is to retake with a pawn on d4 after White “d” pawn goes there and create a very nice and strong center with two pawns. Black should play d5 or Nf6 in their second turn to hinder White’s plans.

This is a solid variation. In move number 2 Black threatens White’s central pawn on e4 (instead of protecting their own pawn on e5 with the popular 2. … Nc6). Very often we get strategic and slow middlegames in this Petrov (or Russian) Defense.

In the third move, the main option for White is to accept the challenge and take on e5. The second player in the World Fabiano Caruana, Boris Gelfand, Anatoly Karpov, and Vladimir Kramnik have played Petrov in their chess career.

The Top 10 Defensive Chess Openings for Black and White: Slav, and French.

Black’s second move (c6) is not exactly a development move, but it has something good: Black protects the center with a pawn and unlike another interesting option 2. … e6 (Queen’s Gambit Declined), this time the second player is not blocking the light squares bishop, so it will be developed, very likely to f5.

In the third move, White should develop one of the knights. Sometimes there will be a symmetric structure in the center, getting some solid defensive position for Black. Famous masters like Vassily Ivanchuk, Vladimir Kramnik, and Viswanathan Anand have played Slav Defense.

Black slightly moves the King’s pawn only one step. This is not as passive as it seems since they will play d5 in the second move. Very frequently there will be symmetric positions with some good defensive possibilities for the second player.

In the third move, White can play exd5 (Exchange Variation), e5 (Advance Variation), or Nc3 or d2, getting into some different lines depending on how the game continues. Strong masters like Tigran Petrosian, Mikhail Botvinnik, and Teimour Radjabov have played French.

The Top 10 Defensive Chess Openings for Black and White: Caro-Kann, and Four Knights

This defense has the same idea as French: to play d5 in the second move, but this time, Black is not blocking the light squares bishop. Of course, there is a shortcoming, and it is that c6 is not really developing any piece, unlike e6, which clears the line to develop the dark squares bishop.

The pawn structure for Black is very solid. In move 2 White plays d4, and after d5, the first player will have to protect, advance or trade the e4 central pawn.

The order of the moves is not completely essential in this opening. In general, the position is very symmetric, and there is a slow although quite interesting middlegame with strong and subtle maneuvers from both sides. White always has a tempo ahead, so, in the mainline, they keep a very small but at the same time dangerous advantage.

The Top 10 Defensive Chess Openings for Black and White: Reti and Philidor

Named after Richard Reti, this system very often transposes to other openings, like English, Catalan, or Queen’s Gambit. The first move Nf3, controls the center, avoids e5 and it is developing the kingside, so White can castle soon.

The second move c4 is fighting for the center, but with a bishop pawn, which means that if at some point there is a trade, White will keep the two central pawns. The light squares bishop can be developed over the fianchetto, getting the Great Diagonal.

Named after Francois-Andre Danican Philidor, this line is one of the most defensive options in this selection.  In move 2, Black plays d6, protecting the central pawn on e5.

A problem with Philidor Defense is that after d6, the dark squares bishop is blocked, so, it will have to be developed inside the chain of pawns, to a passive square like e7. That’s one of the reasons why they don’t play very often this line in the Elite, although, we need to say that strong players like Etienne Bacrot and Liviu-Dieter Nisipeanu have occasionally used Philidor in top-level competitions.

Philidor Defense is still very well for beginners or even club players. The main option for White in move 3 is d4. Also, Bc4 is a good choice.

Web Hosting at the best price: