Join a Chess Club. Is it recommended to improve at chess?

Join a Chess Club. Is it recommended to improve at chess?

From the existence of people who want to learn to play chess, and those others who already know, but want to improve their game, the need arises to meet to play chess. The main purpose of these casual meetings, called chess club, is to exercise players’ abilities.

However, they lack an actual structure that would allow players to implement an effective method to learn and improve their game. 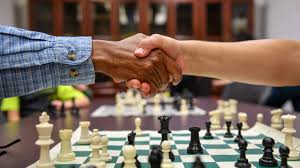 Why does a chess club emerge?

This lack of structure tends to create the need for players to create an administrative structure that allows them to implement a method for learning to play chess and improving their game in a much more efficient manner.

This is where chess clubs emerge, a highly important structure in the development of chess in modern times. The oldest chess club, SG Zurich, from Switzerland, continues to form chess players both in Switzerland and around the globe.

The main function of these chess clubs is to organize chess tournaments, promote learning chess and serve as a training center.

The game of chess

However, they don’t realize the long stairway they need to climb after that first step. Climbing that stairway, as in all uphill climb, requires some effort.

For all those who decidedly start to climb that stairway and start to spend whole hours playing chess, those who get excited when they realize that their moves are becoming more effective, those who better place and employ their positions, for them a path is traced to help them improve the quality of their chess game.

Once we arrive at this point, in order to achieve our goal, we might want to ask: is a chess club important?

Do we need a chess club in order to improve our chess game?

There are people who have developed a good chess foundation simply by playing, reading books, watching videos, etc. Nevertheless, help from a chess coach is of paramount value in learning how to play, improve, and simply learn about the game itself.

At this point help form someone who better understands the general workings of chess will be of great use in our game improvement.

Thus, the function of a chess coach is to give us information and help us process this information so that we can put it into practice in chess games. Theoretical information is complemented with exercises; these are the foundations on which a chess player stands.

The possibilities that a chess club gives to a player in order to improve their game are many. A meeting point where people with the same interest in learning to play chess, with whom to play and practice, a space with boards, clocks, magazines, chess books and a chess coach.

Probably the most important tool in learning chess, since it’s they will articulate the preceding elements so that the player can get the best out of their training and improves their game in the most efficient way.

If we pay attention we’ll realize how important it is for a chess player to own a board with its pieces and to know how to move each one of them.

However, after that first step, a wide ocean of possibilities opens up in which together with our discipline and perseverance we will find the ideal support in a chess club.

MEDITATION TIME🙏 Yes, believe it or not, playi

YOU CAN STILL WIN💪 Have you ever noticed that,

CHESS THERAPY FOR ADHD😮 Did you know that seve

Yesterday I showed you a way to Mate in two moves,

CHECKMATE IN TWO MOVES!👑 As you can see in the

Chess is a game that's been around for a long time

Would you like to find all the Chess Tournaments a

“It is no time to be playing Chess when the hous

Load More... Follow on Instagram
I want Chess Lessons!
SHIV SHOME India
Alberto is giving me step by step guidance on how to progress in chess. Because of his strong repertoire and game analysis support I was able to get an initial rating of 2148. My sincere thanks to my mentor Alberto who constantly supports me in my game analysis and helps me strengthen my game before going to the next rounds. He has a huge database of knowledge that caters to the beginner up to the master level. Thank you, Alberto, for being there throughout my chess journey.
ARVIND VIDYARTHI USA
Vyom and Omya have been learning from Coach Alberto since they were USCF rated ~1500 & ~1000 respectively. Coach Alberto played a critical role in understanding Vyom’s weaknesses and helped him overcome them. He has been an exceptional chess coach with a lot of patience with my kids. He played an instrumental role in teaching them different openings for both black and white. He is always available to help/guide them. He helps to analyze the games and suggest good moves. Our kids are very comfortable with the teaching style of Coach Alberto. He being an active player also helps as he shares what he learns from his games and experience as well.