Learn how to play chess: The moves

Such dispositions consist of: being interested, investing time in it and being constant. Without any of these requirements, it will be difficult for you to see progress in the chess games you play. We will provide you below with a basic understanding of chess. 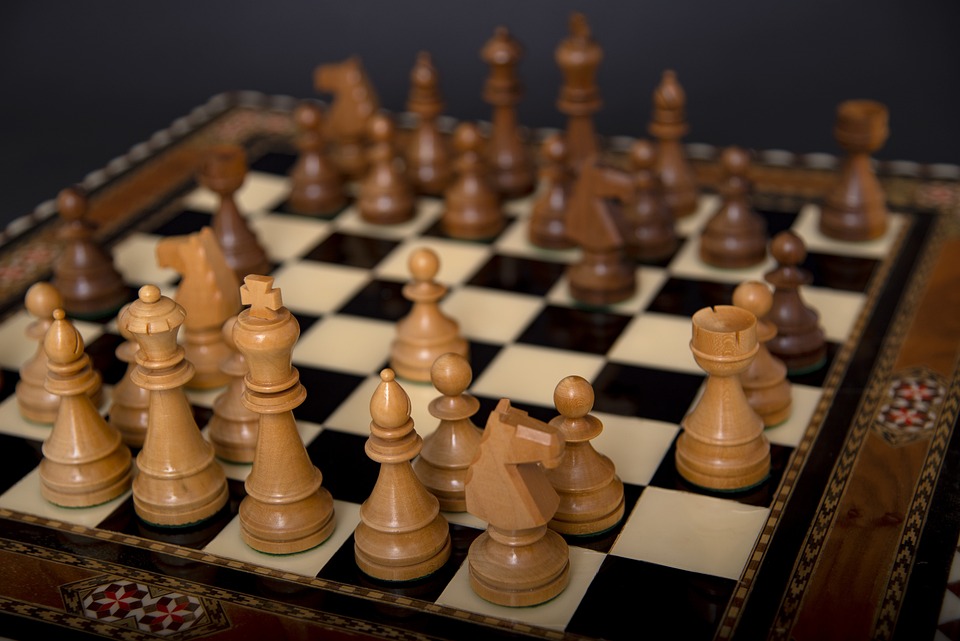 The first thing you need to know in order to learn how to play chess is the board. For those familiarized with chess, the first thing to note is that a chessboard is an 8×8 squared board; resulting in 64 squares, 32 light and 32 dark, laid out alternatively.

The second thing is that, for didactic reasons, squares are grouped into three types: Ranks, files, and diagonals. Ranks are the rows that cut across the chessboard, labeled one (1) through eight (8). Files are the columns, labeled a through h.

Diagonals are any group of squares placed diagonally relative to each other. It is also common to find a coordinates system on the side of a chessboard in which lines are numbered from 1 to 8 and columns are designated with a letter from a to h.

When a chess game begins the players must place themselves on each side of the board facing each other. At the time of arranging the pieces, a rule must be met that a white square is always the first to the right of each player.

How to play chess (II) – Placing the pieces

The second thing you need to know if you want to learn how to play chess placing the pieces. Each player has 16 pieces: 8 pawns, 2 knights, 2 bishops, 2 rooks, a queen and a king.

We place the pieces in the following order from right to left: on the first line: rook, knight, bishop; the queen will always be placed in a square that matches its own color, king, bishop, knight, rook; and on the second line the 8 pawns. Each piece has its own move and can capture an opponent’s piece according to said move.

A player captures a piece when they move one of their own pieces into a square where an opponent’s piece is placed, displacing it and taking its place on the square.

The third and last thing to know in order to learn how to play chess is how to move the pieces. A move is the type of movement that a piece can perform when moving through the squares of a chessboard.

When starting a game the pawn can move one or two squares at a time, from then on it can only move one square at a time. It has two types of moves: forward, when it advances, and diagonal, when it captures a piece. It cannot move backward.

Learn how to move a chess piece

The bishop moves through the succession of diagonal squares. These successions of squares are characterized by being all of the same colors.

The rook moves along a straight line through the lines and columns.

It is important to remember that pieces can move in any direction, except for the pawn that cannot move backward and that no piece can move hover over other pieces of their own color, except for the knight.

The king and queen

The queen has two types of moves: straightforward through the lines and columns, like the rook. And diagonal, like the bishop. These characteristics give the queen great versatility and make it a powerful weapon in a chess game.

Nevertheless, above all is the king. The king can move in all directions although only one square at a time. Without a king, the game comes to an end. Let’s remember that the main goal in a game of chess is to checkmate the enemy king.

We have already walked you through the basic things you need to know in order to learn how to play chess, and you can now play a game.

It is now that you need the required effort to continue with the study of chess, and make progress in your game.

The practice is of paramount importance, after all, it is the practice that makes the master. The more you play, the more your game will improve and if your opponent has a stronger game than, you even better!

The study of the theory and practicing will lead your learning in a methodical manner and make it more effective in achieving better results, but it is always better if you find a chess coach.

After knowing what you need about the board, the pieces and some moves… Now you need to learn how you can play chess and its advanced rules.

For playing chess correctly, you need to know about: check, checkmate, resign, the draws and other important rules. You will know later. How to play chess? Keep reading and become a master.

The rules: How to play chess? (III): Check

You use the word Check in the game while a player’s king is in a position to be captured by the opponent’s piece.  For example, if a white queen is on the same row or column of the king, the king is being threatened by the queen. The player can say “check”, although it is not mandatory to say it.

The king is a piece to protect at all times, it should not be attacked.

Apart from that, a player can not make a move with the King when there is a threat to an opponent’s piece.

How to play chess? (IV): Checkmate

If a player remains in check and has no way to defend himself, either by covering himself with another piece, moving the king or capturing the opponent’s piece, this player loses the game, he is in checkmate.

How to play chess? (V): Draw and resign

There are different ways to get “draw” in chess. One of them can be after a player makes a move then one of the players proposes the draw and it is the opponent’s decision whether to accept them or not.

If one of the players is lost, he can resign the game with the characteristic move of knocking the king down.

Cases in which a game remains in the draw:

Being won and get a draw after a stalemate is frustrating so stay alert so this does not happen to you.

Sometimes there is a case in which these draws are because there is not enough material to help finish the game or there is checkmate. When it’s very difficult to capture the opponent’s king as for example when on the board there is a bishop + king vs the king, this rule is put into practice.

You should get checkmate in a maximum of fifty (50) moves.

There is a possibility of checkmate with one king and two (2) knights. But if the opponent plays properly it will not be possible to finish the game doing checkmate.

Remember that the pawn can promote. So it gives a chance to convert a pawn into another piece that can help you to do checkmate.

It is a rule that applies to professional tournaments.

The name of the rule indicates the use of the same one. If you touch a piece in your turn, you will have to move it obligatorily even if a better movement has occurred to you.

How to play chess? Be careful when you play, always think before you act

This rule has the following exceptions:

On the board, there are times when the pieces are out of order. You want to fix them so that they don’t get out of order. Then, you have to ask permission from the other player before carrying out the action and not after.

You must pay attention to the rules so that you don’t damage your game and you can fully enjoy chess. Also, be alert to your opponent’s movements so that he doesn’t take advantage of the game.

MEDITATION TIME🙏 Yes, believe it or not, playi

YOU CAN STILL WIN💪 Have you ever noticed that,

CHESS THERAPY FOR ADHD😮 Did you know that seve

Yesterday I showed you a way to Mate in two moves,

CHECKMATE IN TWO MOVES!👑 As you can see in the

Chess is a game that's been around for a long time

Would you like to find all the Chess Tournaments a

“It is no time to be playing Chess when the hous

Load More... Follow on Instagram
I want Chess Lessons!
SHIV SHOME India
Alberto is giving me step by step guidance on how to progress in chess. Because of his strong repertoire and game analysis support I was able to get an initial rating of 2148. My sincere thanks to my mentor Alberto who constantly supports me in my game analysis and helps me strengthen my game before going to the next rounds. He has a huge database of knowledge that caters to the beginner up to the master level. Thank you, Alberto, for being there throughout my chess journey.
ARVIND VIDYARTHI USA
Vyom and Omya have been learning from Coach Alberto since they were USCF rated ~1500 & ~1000 respectively. Coach Alberto played a critical role in understanding Vyom’s weaknesses and helped him overcome them. He has been an exceptional chess coach with a lot of patience with my kids. He played an instrumental role in teaching them different openings for both black and white. He is always available to help/guide them. He helps to analyze the games and suggest good moves. Our kids are very comfortable with the teaching style of Coach Alberto. He being an active player also helps as he shares what he learns from his games and experience as well.