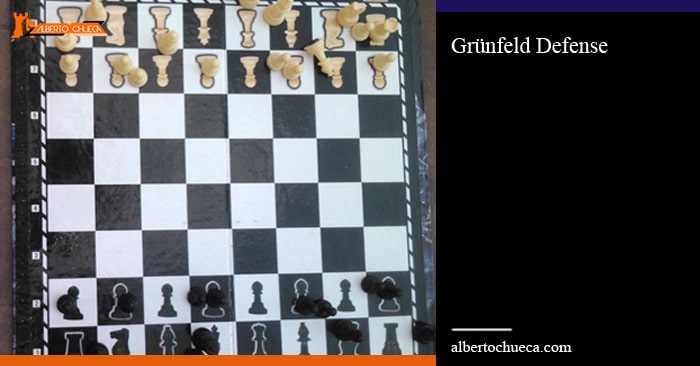 In this post, we analyze an aggressive variation against Queen’s Pawn: Grünfeld Defense. This is a sharp asymmetric line for aggressive players. Something interesting about this line is the fact that the Game of the Century, between Donald Byrne and Bobby Fischer (who was 13 years old at the moment of this game) in 1956 was a Grünfeld Defense by transposition.

It is not so good about Grünfeld Defense, that White can play so many different variations and sidelines more or less interesting and strong. However, the good news is that usually the general ideas for main lines can be played against most of those alternatives.

Grünfeld Defense appears on the board after the moves:

The idea of Grünfeld Defense is to fight against White’s Central Pawns since usually, the first player occupies the center with the “e” and “d” pawns. The main plan for Black will be to attack very strongly these pawns, with almost all the pieces, so White is tied defending the Center. Also, sometimes, White might be forced to do some inappropriate advances with the pawns, to get rid of the pressure, creating significant weaknesses in the position.

Grünfeld Defense has been played by Chess legends like Vasily Smyslov, Bobby Fischer, Garry Kasparov, and Viswanathan Anand, even in World Championships.

Some theory and ideas in Grünfeld Defense

The mainline in Grünfeld Defense is the Exchange Variation (4.cxd5). However, we already mentioned White has several options against this great defense. We cannot study all of them, but we can mention some highlights:

And now White can play

In almost all these lines Black wants to take advantage of the dark squares Bishop on the Great Diagonal, put pressure on White’s Center, and play c5 if at all possible.

This is mainline against Grünfeld Defense

White has two different plans in this variation:

a) Developing the Kingside Knight over e2, the idea of this plan is to reduce the pressure on the Knight, since the move Bg4 is now easily replied with f3. Then the Knight is going to be a great help defending the center.

White is very slightly better. The middlegame is entertaining and dynamic.

Before we finish the theory in this variation, we should mention a famous and interesting line Kasparov and Karpov popularized in Sevilla World Championship:

Some players have been calling this “Sevilla Variation”.

b) Developing the Kingside Knight over f3, which is the most natural square for this Knight. Usually, this idea involves the development of White’s light squares Bishop over e2 to reduce the effect of the pin on g4.

The Rook goes to the half-open file and also moves out of the exposed square a1 in the Great Diagonal.

This is probably the most common structure we see in Grünfeld Defense. Clearly, and as we mentioned before, White has much better control in the center and more space. The first player could try to use this advantage to start some kind of attack on the Kingside. However, these advanced pawns, involve a big responsibility, because now it will be tougher to hold and protect this center.

Besides, something interesting about this pawn structure is that Black has a majority in the Queenside. Maybe in the middlegame, this does not mean too much, but, as pieces are traded, this detail could increase its significance and even be decisive in some endgame.

In the first place, White wants to hold the center, avoid any inaccurate advance with these pawns, and create some sort of attack in the Kingside if at all possible. They will try to use the half-open file “b” and the open file “c”. In some lines, they could think of trade Queens and get the 7th rank with the Rook (going to c7 over the “c” file).

Black will want to attack White’s Center very strongly. The idea is to bind White’s pieces, so they cannot get too active. The Bishop on g7 is probably the most important black piece. The move c5 is also essential. In some positions, Black trades Queens and forces white King to stay in the center, which could be an additional problem for White.

Queen: Very often it goes to a5. This is a very typical move since it is clearing d8 for the Rook, but also it is attacking c3 and pinning that pawn when White has not castled, which means it is also increasing the pressure on d4. In some other positions, it could also go to c7.

Bishops: The dark squares Bishop, is essential in the Great Diagonal. It is going to put a lot of pressure on White’s center. The light squares Bishop is very often traded for the Knight on f3 to remove a defender. It can be developed over the fianchetto as well in some variations.

Knights: The Kingside Knight is almost always traded on c3. If White avoids that trade with some sideline, this Knight could also go to b6 after the common advance e4. The Queenside Knight should be on c6 most of the time attacking d4. After some eventual d5, this Knight can go either to a5 or e5 depending on the position.