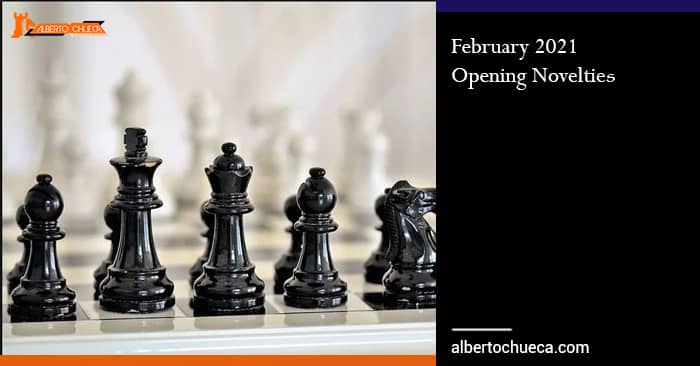 Last month, we started a series that explored the latest chess opening novelties made by top players in chess tournaments. Our January edition of opening novelties explored instructive games by elite chess grandmasters and in this edition, we would continue our study of interesting opening novelties gotten from the games of strong titled players.

We are going to be analyzing three(3) games that were carefully picked due to their enlightening nature.

This wild game by GM Bellahcene against FM Serarols was one of the first games to get my attention. The interesting game featured a classic attack against the castled black king.

GM Bellahcene unleashed some creative opening novelties and played in an Alphazero-like style with the h4-h5-h6 pawn push completely destroying the king’s shelter and crushing his opponent in 27 moves!

Without further ado,  let’s have a look at the game:

So far, we have seen how this position arose from the Catalan opening. Evaluating this position, we can deduce that white is slightly better despite black’s extra pawn due to his advanced development and better pieces activity.

In this position, black would like to hasten the development of his pieces, and castle as soon as possible to avoid an overwhelming attack from white. White, on the other hand, being the better side is interested in making prompt use of his active pieces so as to exploit black’s underdevelopment.

At the moment, White is not bothered about his king’s safety as the king can easily carry out an artificial castling from e1-f1-g1 if he ever finds himself in potential danger.

The game went according to plan and the Spanish FM quickly found himself in trouble after the crushing 18 g5! and 25.h6! by GM Bellahcene, who also sacrificed a piece in the process.

Here is the complete game with annotations.

The second game on our list of opening novelties is between a strong Russian grandmaster and a chess expert player. This game contained no flashy tactical combinations or spectacular sacrifices, it was a case of accumulating small positional advantages and targeting little weaknesses till a point where the opponent is worn down by such a difficult defense.

The novelty played by the grandmaster in this game involved depriving his opponent of the bishop pair by exchanging one of them. After a series of inaccuracies from black, white managed to grab a pawn after exchanging the last bishop for his opponent’s knight.

Black unable to hold the position due to White’s advanced rook and his active king, fell apart after a few more moves.

In the position above, white played the solid 10. Na3!. Generally, it is known that a knight on the rim is dim, but in this case, it does not apply to this knight as it’s ready to become super active by jumping to b5, forking black’s queen, and the dark-squared bishop.

10. Nc3 would have achieved the same objective but the problem with Nc3 is that black can play a6 killing every thought of a knight fork there. Whereas, the knight on a3 would be unperturbed by the a6 move because it can easily move to the comfortable c4 square attacking Black’s bishop. If the bishop retreats, then white has won a valuable tempo.

Let’s have a look at the game.

The last game on our opening novelties list for the month of February features one played by two strong Armenian grandmasters. This is a very exciting game that shows how the Arkangelsk Variation of the Ruy Lopez opening can be really difficult for the player handling the black pieces.

This is due to the fact that in this particular variation, the black king may not really time for castling and this can be exploited just like what happened in the game.

On the 19th move, GM Ter-Sahaykan deviated from the normal 19 Nxe4 and opted for the quiet and strong 19 Rc1!.

This move simply develops the rook that was inactive on a1 and brings it to the semi-open c-file bearing down on the weak c7 pawn. Black is essentially forced to waste a tempo trying to defend the pawn.

In trying to do this, black goes the wrong way with 19…Qd7 instead of 19…Rc8, which allows white to develop his queen to h5 keeping the king in the center for a little while.

A few more inaccuracies from black resulted in a series of threatening moves and a knight sacrifice that forced the opening of lines towards the king, the loss of the black queen, and a well-deserved victory in less than 30 moves.

The game can be seen here.