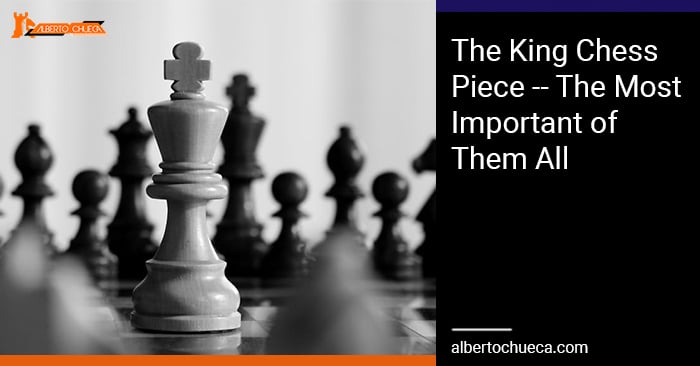 Was it interesting? Share it to help!
Click to rate this post!
[Total: 1 Average: 5]
What is the goal of the game of chess? Have you ever really thought about that, when you watch others play a game of chess, and you want to do the same? What if I told you the goal of the game is to slay the enemy chess King? You’re probably thinking, “Wow, that’s mean!”. Yes, chess is a mean game sometimes. In honor of the most important piece on the board, we are going to devote this whole article to studying and admiring the chess King. From the looks, some history, to how the chess piece King is applied over the chessboard in the real world. Enjoy! 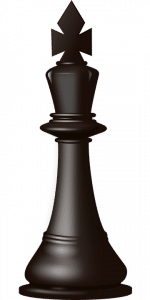 The figure we see above is a good example of how the King chess piece looks. You notice a wide base on the bottom. It subsequently thins out as you go up, then the “head” of the King becomes apparent. The head starts to widen, perhaps indicating that the figure up top is some sort of royalty hat. Last, but certainly most important, is the iconic “crown” the King wears on his head, to display his royalty. The King, understandably, is the tallest piece on the chessboard.

How does the chess King move on the chessboard?

Despite his authority and importance to the game, the King is by far the slowest moving piece on the chessboard.

That is right. The chess King above can only move to the highlighted squares. This indicates that the King can only move one space in any direction it wants. Why does the King have such limited movement? It would only make sense because the goal of the game is to checkmate the King. Note you have to checkmate the King, not capture him. To Checkmate is to put the King into an attack he cannot legally run from. So no one can capture the King if he is left en prise by mistake. Therefore, if the King had mobility on the chessboard, it would be very difficult to checkmate (in other words, trap) the King. Imagine checkmating a Queen… that probably only happens a few times in a lifetime!

How to drag the chess King down?

To beginners to the game, checkmating (not capturing) seems like a very daunting task. The game starts crowded with 32 chess pieces, and how am I to ask you to navigate those waters and hunt down the King?! One method I will give to beginners is that the better player will take more pieces from the opponent’s camp. If you can take a bunch of your opponent’s chess pieces and have the board to yourself, you have a great chance at mating the King.

The primary method to win games is called learning “Checkmate Patterns“. Experienced players don’t toy around with the position and “somehow” win the game. Just like in math, when you learn about the Pythagorean Theorem, if one of the numbers involved is 4 squared, you don’t accidentally find out that four squared is 16, you’ve known based on previous experience! We will look at a few examples of checkmate patterns.

We see the two Rooks above on a8 and b7 are depriving the Black King of every possible square he can move to (highlighted by yellow). Let’s look at one more example:

The Queen and Bishop complement each other nicely to checkmate the Black King. All of the moves Black wants to play (in yellow) are controlled either by the Queen, or the Bishop, who defends the Queen. A nice complimentary checkmate pattern!

The Role of the King in the game

We now know how the chess King moves during the game, and that the King is the ultimate prize necessary to win the chess game. What should also be noted is the King’s role during the game. If the King is who the enemy’s pieces are rabidly going for throughout the course of the game, doesn’t it make sense to keep the King safe? I think so. The most common method of safeguarding the King is by castling. 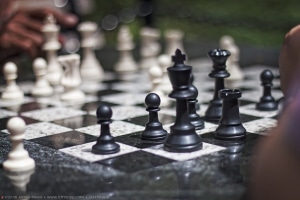 The act of castling is as follows — once there is space clear between the King and the Rook, the King moves two spaces towards the Rook, and the Rook flips to the other side of the King right next to him.

As we see above, the White King can go to c1 or g1, depending on which direction he wants to castle, then the Rook would move to the corresponding square highlighted in red. There are a few stipulations to castling that are good to remember:

The role of the King in the endgame

The role of the chess King in the opening and the middlegame are very clear — to be kept safe! However, in the endgame, there is far less danger as material on the chessboard is severely reduced. Therefore, when it comes time to play this stage of the game, the King can and should have a very active role in the game. Instead of being sheltered in his castled position, it’s time for him to join the fight and be a meaningful chesspiece himself! Let’s put this into perspective with a couple of practical examples:

In the above position, we see an endgame where both sides have a King, Rook, and two pawns. The position is roughly equal and should be drawn with the best play, as it will be difficult for either side to make progress. However, let’s look at the same position with a “slight” difference. ;)

It’s the same position, but what’s the difference? The White King is activated! White is not quite winning by any means but will have an easier time winning the game, given that he and the Rook can work together to collect the remaining pawns and potentially win the game.

▷ The Queen’s Gambit in Chess — What You Need to Know

▷ The Chess Piece and Chessboard, An Introduction
Scroll to top