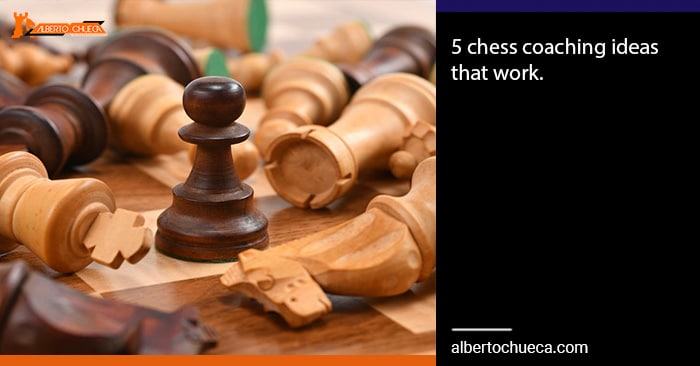 First of all, I must explain to you what the sport of chess is and what it consists of in order to be able to give you some techniques that work quite well for coaching. This sport is an activity between two people who have 16 pieces placed on a board and move according to the rules. The board has 64 squares.

The game takes place on an 8×8 square board. The squares alternate black and white shades. Each of these 64 squares are the possible positions that the pieces can take during the game.

At the start of the game, each player has 16 pieces that are hierarchically divided as follows: the king, the queen, 2 bishops, 2 knights, 2 rooks and 8 pawns.

The movements and captures of each are:

The king moves a single square in any direction, but you must remember that you must not put him in danger of being captured.

The queen moves in a straight line either diagonally, vertically or horizontally for as many squares as you wish.

The bishops move diagonally by the number of squares you want as long as they are the same color.

The knight moves in an L-shape with 3 vertical and 2 horizontal squares.

The rooks are moved by the number of squares you want as long as it is horizontal or vertical.

The pawns to start their movements can move two squares to the front, once they make their first move they can only advance one square. In addition, it is the only piece that does not make its capture in direction to its displacement, to capture it moves a square diagonally.

It is a strategy game since its main objective is to overthrow the king of the other team. To achieve this, you must threaten the square where the king is located with some of your pieces. You will have achieved the objective when your opponent does not find any way to protect the king. Whether he places a piece to protect it, moves it or captures your piece. If your opponent can’t make any of these moves, you’ve achieved checkmate by ending the game and getting your victory.

The game of chess is not as simple as it seems, this is a mental sport. You must develop a very good strategy to achieve the objective and not just move your pieces in a random way. For this reason, I bring you different techniques that will help you to train yourself to carry out a good game.

Detailed analysis of the participant’s thought process: to help the training of a new player, it’s important to analyze the participant’s thought process throughout the game. To do this, you need to understand very well what the player saw in each movement. How he distributed his movements and his time, see what his mistakes were and why he made them. This analysis is mandatory for training in this game. When you analyze a game, this beginner understands his mistakes much faster so as not to make them again.

Final game: playing in groups is undoubtedly one of the best ideas for chess training, besides that playing this way is very fun and streamlines the mind of the players. After you establish the final game, the most useful thing is that they use similar positions, that is to say, they can play in the following way: 2 bishops against a bishop and a horse and each one that has 5 pawns.

Model games: for more effective teaching of openings, using model games is a good technique, you should look for the best players. It is very important to analyze the repeat ideas of the patterns over and over again. Of course, when looking at these games it will help for the inspiration of the beginners. This technique works effectively to remember all the theory that can sometimes be forgotten.

Tactical training: for any good training, this part is fundamental. The best way to carry it out is with the establishment of positions and that each player solves it in a limited time. The answers must be written down in order to be able to analyze all the possible solutions.

Studying the classics: presenting the classics to the students is also an essential technique. Especially if these new players are children as they absorb knowledge much faster than adults. You might surprise that when they see the classics they could recite every single one of their plays from memory. Knowing the classic moves is a fundamental technique for a good workout.

Applying these 5 chess coaching techniques, players will have a totally effective performance. You must remember that practice is key to getting better every day. If you play for a few hours during the week, every day you will do much better.

If your desire is to be a professional chess player, you must take your training very seriously. It is a game in which if you make a bad move, it could ruin the whole process. That’s why every move must be well analyzed in such a way that you must project your future moves as well as understand what your opponent will do in the next move. Take your time to think carefully about what you’re going to do.

On the other hand, if you only play chess for recreational reasons, you don’t have so much pressure on you. So it doesn’t matter too much if you’re wrong, as the goal is to have fun. You’ll be doing it in a way that will help your mental agility for decision making.

▷ The Initiative In Chess – How To Use It Effectively