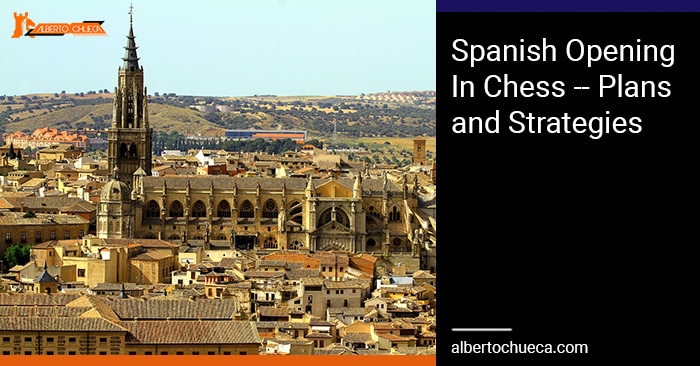 The next opening we are going to learn about is the Spanish Opening in chess, also known as the Ruy Lopez. The Ruy Lopez name is named after 16th-century Spanish priest Ruy Lopez de Segura. The Spanish opening is one of the principled openings we teach to beginners, as the emphasis is on controlling the center, piece development, and early King safety. It’s very similar to the Italian Opening, as the same principles are applied there.

Black has a host of variations they can play from here, and many more branches can sprout from that tree. We will be covering the main lines as well as the main ideas for the Spanish Opening in chess.

As mentioned previously, we’re going to be focusing on the mainline and main ideas, and we will be slowly branching out of that as it fits. The idea behind Bb5 by White is that White is pressuring e5 by pressuring the Knight on c6, which defends the pawn on e5. Note, however, say Black plays a6, Bxc6 does not win a pawn, because of dxc6, Nxe5, Qd4!

The Knight on e5 and pawn on e4 are blatantly forked, and White will give the pawn back to Black.

We can see by the arrows what each side’s plans are. White wants to play c3, d3, and maneuver their Knight, Nd2-Nf1-Ne3 or g3, and potentially control f5 as well as expand in the center. Black wants to play Na5, c5, maybe Qc7, and gain space on the Queenside. There are many branches we can create in this variation of the spanish opening in chess. There is one line I do want to analyze, it’s very devious and aesthetic, that is the Marshall Gambit.

You may wonder why this gambit a pawn. d5 is defended and attacked twice.

However, after 9. exd5, Nxd5, the pawn on e5 is hanging, so is, therefore, the one giving itself up as a sacrifice.

The idea is that after 10. Nxe5, Nxe5 11. Rxe5, White is up a pawn, but the Rook exposed on a diagonal leading towards the Kingside could prove dangerous. Never could you imagine the Spanish Opening in chess could be so potent!

We can really see Black’s attacking potential, with the Queen already on h3, the Bishops swarming down the Kingside, and perhaps f5 with a Rook lift to the h-file will be sufficient for a Black attack.

It goes to show how dangerous the Spanish Opening in chess can be!

Spanish Opening In Chess: Other Lines

This is the type of line where Black plays for Queenside pressure, as the pawns on a6 and b5 help make that possible.

And that’s the structure you will be accustomed to. Black has a space advantage on the Queenside, while White will be seeking counterplay in the center and perhaps the Kingside in the future.

Is the Spanish Opening in chess for me?

On one hand, the answer to this question can depend on which side your playing on.

However, as it turns out, the concepts and general strategies are similar on both sides. Piece development, controlling the center, casting, and planning is key for both sides.

The Spanish Opening is without a doubt a very strategic opening.

The Spanish opening in chess may seem dry at first, there are no immediate fireworks as you would see in a Najdorf Sicilian or a King’s Indian Defense.

However, as mentioned previously and shown with the variations, plans do exist.

What appears to be the case in the Spanish Game is that White is simply playing with the tempo advantage and slowly building their position, while Black goes for counterplay, either on the Kingside with the Marshall Gambit, or the Queenside with the standard d6-Na5-c5 variations.

If you like strategic and versatile chess games with endless possibilities, this opening very well maybe for you. Give it a shot, on either side!