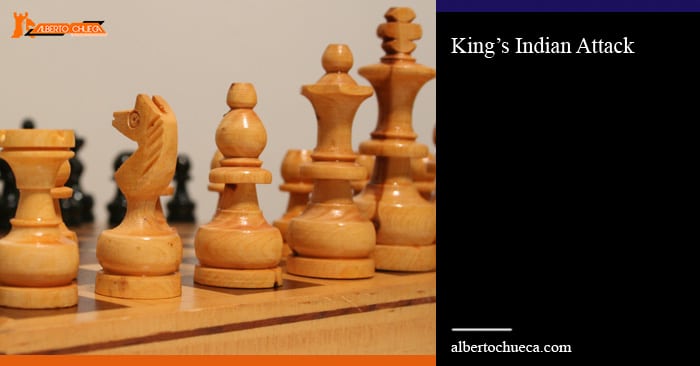 In this post, we will analyze a really special opening: King’s Indian Attack. More than an opening variation, this is an interesting and easy to learn system for White. As it is stated in the name, the main goal is to create a powerful attack on the Kingside against the black King. In general, when Black knows the theory very well, they can manage to get a balanced middlegame, but the good news is that this does not happen very often among beginners or club players.

Some of the best characteristics of this system are that it is flexible and versatile: this means that you can use some different orders of the moves (starting with 1.Nf3 or 1.e4 for example), but also it can be played against different defenses, like Sicilian, French or Caro-Kann.

Even when King’s Indian Attack is not very often played in the elite, there are famous examples by legendary chess players like Bobby Fischer or Garry Kasparov.

Some theory and ideas in King’s Indian Attack

The idea for White in King’s Indian is to develop pieces in this way:

This is mainline when Black plays Sicilian with e6:

Up to this moment, White has been playing normal development moves. But one of the main ideas for White in this opening is to play e5.

The position is unclear.

This is the main pawn structure we can find in King’s Indian Attack. As the center is closed, there will be attacks in the flanks: White in the Kingside and Black in the Queenside. The first player has a good pawn on e5, getting some space and controlling important squares (for example, the Knight, which is a great defender of the castling, cannot stay on f6 now). However, since this pawn on e5 cannot be defended by other pawns, Black can also target it with some pieces and slave a little white pieces.

Since Black is very often putting the Queen on c7, to attack White’s central pawn on e5, there is a common idea where White sacrifices a minor piece for a pawn on d5 to play the discovered attack e6 later (attacking the Queen with the Bishop on f4 and also getting the Knight on d7 with the “e” pawn). In general White does not get a material advantage with these tactics; however, they destroy the Black’s strong chain of pawns in the center, open lines for Bishop and Rook, and usually get some very interesting activity.

The advance h4-h5-h6 is very often used as a spearhead in King’s Indian Attack to create weaknesses in the castling. And there is a nice plan to take the Queenside Knight to the Kingside, through the path d2-f1-h2-g4 or also d2-f1-e3-g4. Also, in some positions, this Knight could go to g3 after the move g4. Sometimes White can sacrifice minor pieces on h6 or f6 to open lines against black King.

We need to say that the attack by Black on the Queenside can be strong. They usually start a pawns storm and use the “c” file for the Rooks and the square d4 for the Knight (since if there is a trade the “c” file will be half-open and there will be pressure through this line). But it is always very nice to know that as White, we are attacking where the enemy King is.

Queen: Very often we will need to put it on e2, to help in the defense of the pawn on e5. In some other positions, we do not have to move it until the middlegame, when it can go directly to h5.

Rooks: The Kingside Rook has to go to e1, supporting e5. The other Rook usually stays in the Queenside, protecting that flank. It can fight against black Rook if the “c” file gets open.

Bishops: The dark squares Bishop goes to f4 in the Opening to protect e5. Then in the middlegame, it could be an important piece helping in the attack. There could be sacrifices of other pieces on d5, f6, or h6, and this Bishop is essential for the counterplay in all these cases. This piece can also be sacrificed on h6 in some positions.

The light squares Bishop controls the great diagonal. It could be sacrificed on d5 to do the discovered attack with the “e” pawn. Also, it can go to e4 to create strong threats on h7 along with the Queen.

Knights: There are very nice plans with the Knights. The one in the Queenside goes to the attack in the other flank using paths like d2-f1-h2-g4 (very often thinking of some typical sacrifices on f6 or h6) or d2-f1-g3. The Kingside Knight is a great defender of e5, and at some point in the middlegame, it can go to g5 to help in the attack.