Chess in schools: The big benefits – 5 ideas about it. 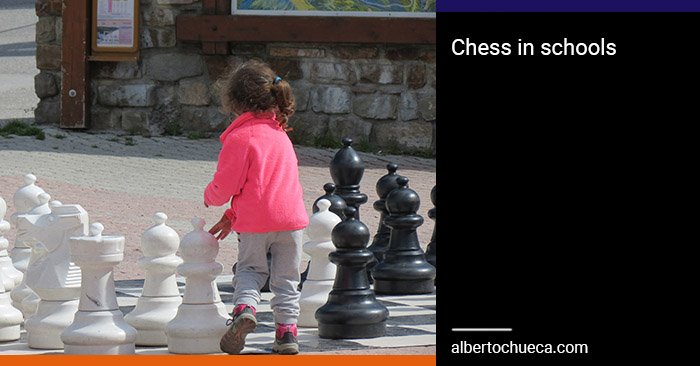 Every day, people become more aware of the benefits of playing chess. This is one of the reasons for the use of the chess in schools. It’s being implemented as an activity for students to practice during class and during breaks.

However, the beginning of chess in schools goes back a few years to California. A volunteer father developed a project which goal was to teach students how to play chess. The idea was well accepted in schools nationwide and expanded quickly to schools in other countries. This made chess a class many students have to take.

A study about the benefits of chess in schools

In 1990, the United States Chess Federation financed a study which objective was to investigate the educational benefits that students gain after being introduced to the world of chess. The study’s final results were more than 37 pages but had some very important conclusions.

The first is that the most amazing thing about chess is the way that it transforms people inside out. They become fanatics of chess and begin playing it nonstop once kids know the rules. In general, they love this sport and their concentration capacity increases, and therefore, their educational learning.

One of the discoveries made by this study came as a shock for investigators. There are very dramatic stories about kids blessed with good homes and intellectual capacity, alongside kids with problems. There were 15-year-old students that are candidates for being a master (the third highest level of chess).

The study also assures that chess is one of the most significant things that have entered the school system. It would be a tragedy if Education Ministries couldn’t incorporate it into schools.

Chess in schools around the world

Following the tradition that “one video is better than 1000 words”, an inspiring video has also been showcased in many schools. This video teaches kids about how beneficial chess can be for their lives.

This video starts with some very interesting words that say chess is the rock on which human intelligence is based. And later it shows live examples of the different activities using the chess.

As a matter of fact, after showing the video in several different schools around the world, a boy said that chess meant to him the same as music means to a musician. Being able to make that connection with the sport is one of the things chess enthusiasts want to pass on to the new generation.

The most important thing about introducing chess in schools is that it teaches kids many values. Patience, forethought, long-term planning, and the capacity to find alternative solutions are just some of the principles kids gain by playing chess.

When students begin to practice and play this sport, they improve the academic field immediately. From the day a kid learns how to move a pawn, you can see a big difference in his attitude, his behavior, and his academic performance.

A debate about the educational benefits of chess

If you want to go deeper into the subject of chess in schools. We can observe some of the comments made in a long debate about the educational benefits of chess.

One of the attendants said chess requires individuals to become actively involved in a mentally demanding competition and its effects are quite stimulating, healthy, and invigorating.

Another person who assisted in the debate assured that chess is a sport of an intense calm. It seems self-contradictory but is a very simple, yet appropriate way of describing it. Chess can be a very intellectually exhausting sport.

The last remark made during this debate, which sums up the entire spirit of the sport, was that chess players live through the emotions of an exciting and fascinating story. And you? What do you think?