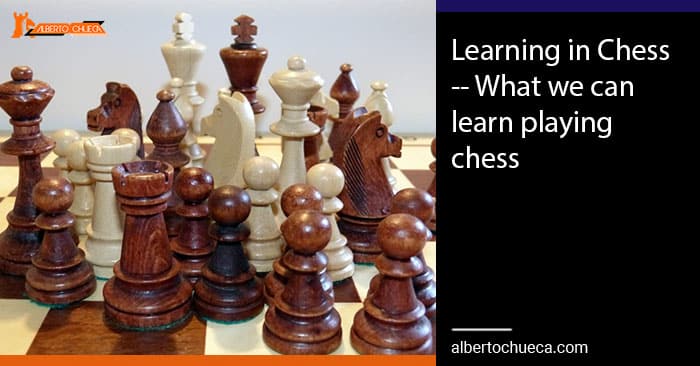 Was it interesting? Share it to help!
Click to rate this post!
[Total: 1 Average: 5]
Chess is one of the greatest human inventions. The rules can seem arbitrary to an amateur but they are the result of more than 1000 years of modifications and refinement. The modern game, which hasn’t changed since 500 years ago, is perfectly designed to demand the human mind to go as far as it can possibly go. The Chessboard is the right size and piece movement for the game to simply be viewed in an aesthetic manner, which is why we want to show you more steps in learning chess.

On the other hand, chess is a mirror of life, rich in metaphors of human experiences. Until the end of the game, it is a non-violent battle between opposite armies, without any injury ever reported. It’s a test field where we can experiment and represent personal dramas with no consequences other than cleaning the board and starting over.

A mix of primitive instinct and sophisticated calculations allows the player to directly participate in the other’s mind. With this, the player can obtain experience for himself; memorize the other’s common patterns; methodically create his moves; establish traps: analyze variations, and set up the move to defeat his opponent.

It is also a canvas for players to create big masterpieces, like famous paintings, that can be enjoyed by the next generations. Up next we leave you some of the things you can learn in life through chess.

Threatening is stronger than action

This is a common saying among chess players. The idea is that, with the threat of a move, you can push your opponent in a specific direction. In reality, however, making this threat can also lead to as many problems for oneself as for our rival. The parallelism with human relations is evident.

Tactic is essential in learning chess

Although you can prepare long-term plans, you need to be constantly alert for immediate danger or game-changing opportunities. You can become an important person and even have a solid trajectory, but the lack of attention in an important moment can divert you from the goals you’ve chased for years.

It’s the same in chess. A tactical oblivion can cost you the match, even if you’ve gained some advantages during the prior movements.

Chess is made up of three phases with different tactical themes and common goals, but that generally require distinct sets of abilities. The opening needs a lot of study about basic strategic themes like the development, the center, and the initiative… and of course a great memorizing capacity.

The best defense is a good attack

A common phrase in sports, this rule can also be applied to chess. Even if you want to tie the game, playing passively against a strong opponent is rarely effective. You will need to work actively to avoid the other player from developing a strategy against you, so it doesn’t distract you from your plan for attacking.

▷ Teach chess, are you interested? I reveal the best way!